Day 8
We woke up today around 7 a.m.  It was another rather dreary, cloudy day, but there was no prediction for rain.  Eric had his breakfast and headed off to the convention center and I lazed around for a while before getting moving.
I made my way down to the bakery near the hauptmarkt and bought some muffins for Eric for the next few days and again perused the stalls in the market.  I then took my purchases back to the apartment, ate my breakfast, and then set out for my afternoon of wandering.  I wanted to try and get some more of the old city covered, as so far I seem to keep wandering the same areas. 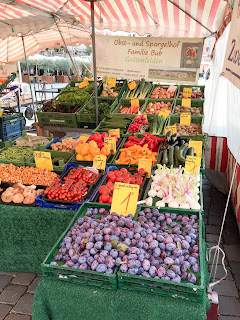 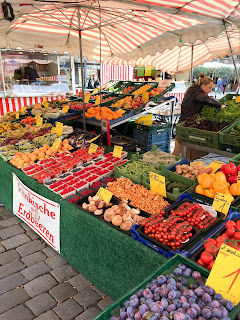 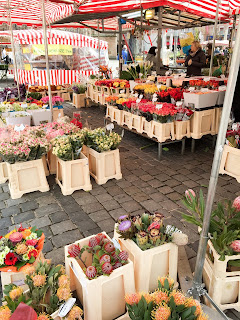 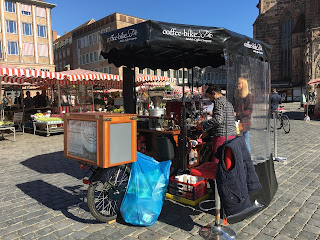 After breakfast, we decided to do a little shopping.  We had seen a leather store along the river that had some very nice belts.  Eric decided he could use a new belt since he only has one belt that he has had for 15+ years.  I had also scoped out another leather store in the craft market that had some nice belts.
On the way to the first leather store, we stopped into the health food store and I bought my souvenir, some German-made essential oils.  It is apparently very hard to get this brand in the United States and they are supposed to be really good.
Then we made our way to the first leather store and looked at their belts.  We then walked all the way to the other side of town to check out the belts at the craft market.  Eric ended up liking one of the belts at the craft market, so he bought one there.  Of course, he is so skinny they had to cut it down and add about three holes to make it fit him.
We trekked back across town, back to the Hauptmarkt and bought some flatbread and fresh cheese spreads to have for a late lunch back at the apartment.  We had made reservations for a late dinner at 8:45 at one of the Italian restaurants we could not get into a couple nights ago, which is apparently very good.  So we needed to have something for a couple snacks this afternoon.
After we made it back to the apartment and Eric had a breather, we packed up some of our stuff (in preparation for our early departure on the train tomorrow morning to Rothenberg).  After we got some of our stuff packed, we ventured out again so I could show Eric the garden park that runs all along the old town wall just outside our apartment and all the way to the castle.
We made our way along the wall to the castle and then down to the Hauptmarkt and over to the other side of the old city and then back to the apartment.  I think we have done about three laps of the old town today so far.  Then, later for dinner we get to walk almost all the way across town again.  We will easily probably have 15+ miles of walking in today.  I think I have just about worn Eric out…
Around 7 p.m. we decided to head out to see what kind of night photos we could get from the few vantage points we had scoped out.  We headed toward the castle and took a few photos there and then down toward the Hauptmarkt area.  By that time it was getting close to our dinner reservation time of 8:45 so we high-tailed it to the restaurant.  We tried a new Italian restaurant that was very popular and rated very highly on TripAdvisor.  Since it was a rather late dinner, we split a pasta dish that was fabulous—the ratings were correct.
After dinner we made our way back to a couple other spots we had wanted to try taking some night photos.  After we had exhausted about all the photo spots, we made our way back to the apartment.  By that time I think it was close to 11 o’clock.  We probably made it to bed around midnight.
Day 12
We got up early, had a little breakfast, took the trash out and cleaned up the dishes in the apartment before trekking our way down the moat path with our luggage all the way to the main train station.  We thought that taking the 9:05 a.m. train on a Sunday would be a good choice.  We didn’t think it would be very busy.  We were wrong—the train was packed.  Luckily there was a very small first-class section which had space available.  The people in coach were packed in and were standing in the aisles.
We had a very short time to change to our next train at the designated stop.  Like the majority of the trains on our trip so far, our current train was running late.  So we did not think we were going to make our next train which meant we would be sitting at the station for about an hour.  So Eric looked up an alternate route on his phone.  As it turned out, if we stayed on the train we were on and changed to a different train at another station further down the line, it would take a little longer to get there, but it would get us to Rothenburg.  That train also had a first-class car, so we would have a better chance finding someplace to sit if it was busy.  So that is what we did.
We finally arrived in Rothenberg around 12 p.m. and took a taxi to the hotel.  Eric didn’t feel like hauling the 50-pound bag all the way through town, up and down hills over cobblestones.  It was a good choice after we saw the route to our hotel.  It was super busy in town as well.  I’ve never seen so many tourists wandering everywhere.  You would think it was Disneyland.
We got checked into our hotel and then went out in search of food as we hadn’t had anything of substance since breakfast.  There was an Italian restaurant a very short walk from our hotel, so we decided to try that.  It was very, very good.  After filling our bellies, we decided to walk around town and see if we could get any good photos and scope out any possible night time photos spots.  We had plans to attend the night watchman’s tour at 8 p.m.  It is very well known and very popular. 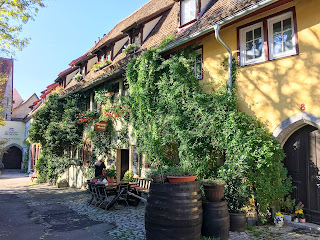 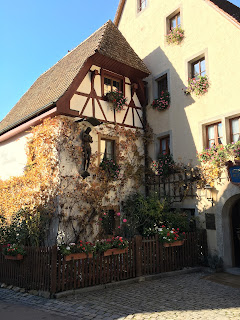 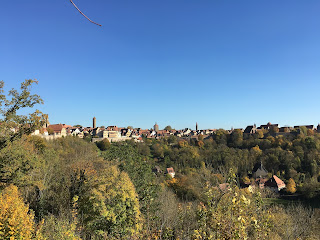 It got dark around 7 p.m. so Eric got his camera ready and we headed out to see if we could get any good night shots around town before the night watchman’s tour.  We found a few really good spots and managed to get some photos without people in them, which after seeing the crowds earlier, we thought would have been impossible. 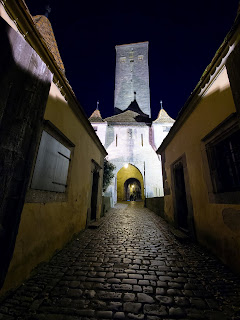 At around 8 p.m. we made our way to the town hall to catch the tour which took about an hour.  The guy who leads the tour has been doing it for 20 years and does a really good job and is both entertaining and educational. 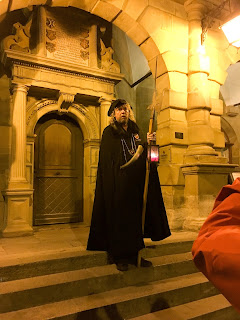 After the tour, we took a few more photos before heading back to the hotel room to get to bed so we could get up early the next morning and attempt to get some morning photos before the crowds overtook the town. 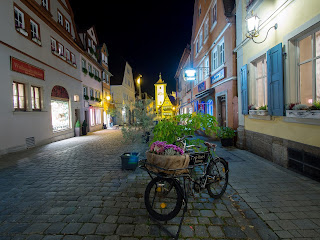 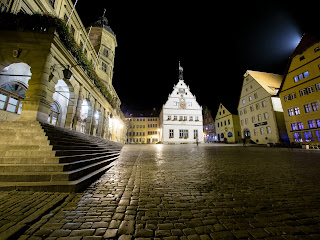 Day 13
We got up around 6:30 and decided we would walk the entire wall around the town.  The majority of the wall is originally, but there are several sections that were rebuilt by donations from all over the world after parts of the wall were bombed in 1945.
It was a lovely morning walk.  The sun was shining and there was a light fog hanging over the valley as the sun rose.  We only ran into one other person on the wall for the entire 3-miles. 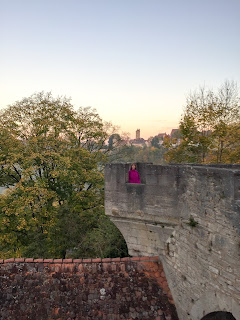 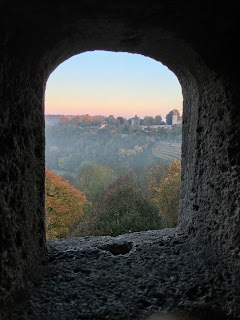 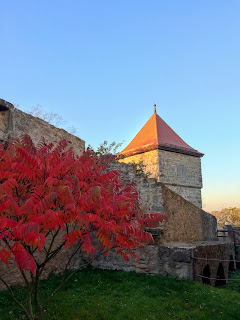 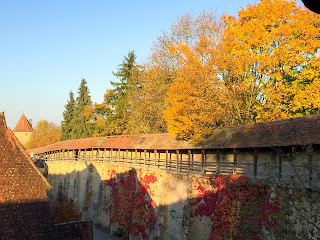 We made it back to our hotel room around 9 a.m. and got cleaned up and finished packing so we could get checked out by 11 a.m.  We were told we could leave our bags at the front desk while we wandered around town until our 3 p.m. train.
By the time we got checked out, we were hungry, so we decided to go to the bakery then to Medieval Crime and Punishment Museum.  It was very interesting seeing all of the way that they got confessions from accused people and what happened to you after you confessed to a crime.  Many of the items on display like shame masks, thumb and leg screws, and documents were originals, several of which were from Rothenburg. 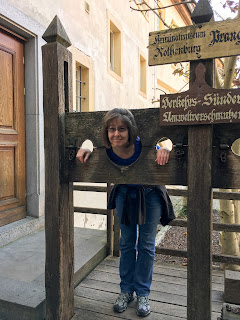 After the museum we decided to go back to the Italian restaurant we had eaten at yesterday as it was so good.  The weather was beautiful, so we sat outside on the sidewalk as we watched all the other tourists walk by.  There were much smaller crowds today than yesterday.  Obviously, in addition to the usual tour groups, they must get a lot of locals doing daytrips on the weekend. 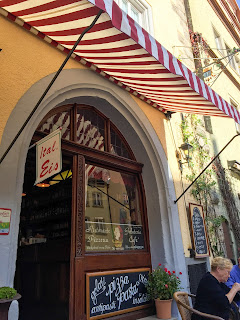 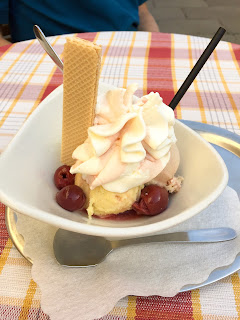 After having lunch and walking around town a bit and we made our way back to our hotel to catch the cab we had reserved for 2:30.  We wanted to make sure we got to the train station in plenty of time.  It is only a short ride to the train station, but if you miss the train you have to wait an hour for the next one.
When our train arrived, we climbed aboard to start the couple hour journey through various towns on our way to Frankfurt.  We made all our transfers okay and arrived at the Frankfurt airport station around 6 p.m.  We had a reservation for tonight at the Sheraton which is actually attached to the airport.  Needless to say, we don’t have to worry about getting to the airport tomorrow, as we are already here.