Singapore Day 3 and 4
Today was a VERY long day.  We set our alarm clock to get up at 6 a.m. so we could get an early start.  We had decided we would try to go to the Botanical Garden/Orchid Garden and then the Jurong Bird Park.  However, we woke up at 6 a.m. to a massive thunderstorm and pouring rain.  Unlike most tropical storms which are usually heavy but very brief, this one seemed to go on and on.  The lightning and thunder put our worst monsoon storms in Arizona to shame.  Needless to say, we did not leave when planned.
We finally got going around 9 a.m. as it looked like the rain was just down to a drizzle by then.  We made our way out of the hotel, through the shopping mall, and across the street to the MRT station for the ride to the Botanical Garden MRT stop.  Getting around Singapore is incredibly easy using the MRT, and with the 3-day Tourist pass you get unlimited trips on most methods of public transport.  In about 30 minutes or so we made our way across town to the Botanical Garden, which is listed as a UNESCO World Heritage Site.  It is completely free to get in.
If you like plants and flowers, I would highly recommend the Botanical Garden.  The garden is huge and you could very easily spend an entire day or more.  However, if it is sunny out, I would highly recommend going very early in the morning.  I believe they open at 5:30 a.m.  We got lucky in that it was cloudy, bordering on very light showers, most of the time we were there.  Unfortunately, the clouds did not last and about the time we got to the Orchid Garden (which I also highly recommend at S$5 pp) the sun finally broke through.  It was so hot and humid I think Eric was about to pass out.  They do have one cool house for orchids on the premises and we made our way there to get a bit of relief from the heat. 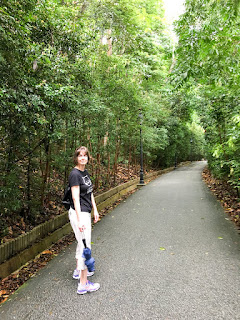 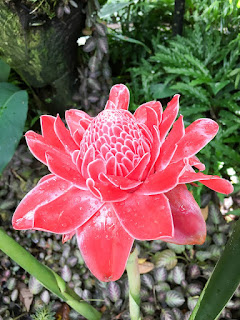 One thing you look for in Singapore on a sunny day is any place with air conditioning.  After just about walking ourselves to death in the heat, we stopped at one of their on-site restaurants for lunch before heading back to our hotel.  We actually sat outside to eat lunch as it was in the shade with ceiling fans and was cooler than eating inside (which we figured would be air conditioned, but wasn’t).
We got back to our hotel and relaxed for a little bit before heading out for our late afternoon/evening adventure.  Eric downloaded the 260 or so photos that I took of all the flowers at the Botanical Garden (I’m a little picture happy).
After a short rest, we headed out around 5 p.m. to make our way to the Gardens by the Bay.  Last time we were in Singapore we visited the Gardens by the Bay during the day and again it was a sunny day so it was so hot and humid outside we really could not wander around for very long.  However, they do have several huge indoor air-conditioned domes which we visited—which were wonderful as well as being cool.  This trip we wanted to visit in the evening in the hopes that it would be a bit cooler as well as we wanted to see their free light and sound show in the Supertree Grove, which we had heard was quite spectacular.
We wanted to make sure we got there before sunset so we could scope out the best vantage point for photos, as well as get some dusk photos.  After a bit of wandering around, we found a pretty good spot and staked our claim.  Then it was a waiting game for the sun to go down.  It was a bit hot waiting, but as soon as the sun started setting, it was not horrible.  The sunset was around 7:11p.m. and the first of the two light shows starts around 7:45 p.m. Eric sat up his camera on a little Gorilla tripod we had with us and put it on a fence post.  Once the show began, Eric commenced the picture taking process using a longer exposure and I took a few videos and attempted to shoot pictures (not nearly as good as Eric’s). 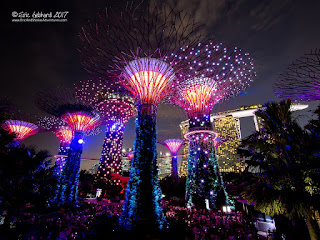 After the light show ended, we decided to wander around the Gardens and see if we could find any other good night-time picture spots.  By that time there was a nice breeze and it was actually almost enjoyable to wander around.  By one of the lakes, we found a large metal dragonfly sculpture that was lit up with the Supertrees behind it in the background.  It was also a good vantage point for a shot of the Marina Bay Sands.  We found another spot that wasn’t bad for a picture of the Singapore Flyer (giant Ferris wheel). 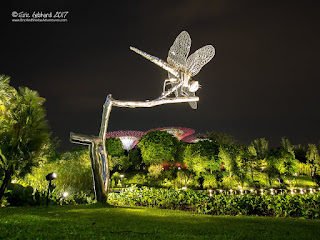 After we thought we had about all the photos we could get in the Garden for one night, we headed over to the Double Helix bridge near the Marina Bay Sands.  Unfortunately, the football stadium which is adjacent had its massive flood lights on, which pretty much ruined most of the picture taking.  We wandered down the helix bridge for a while and finally they turned the stadium lights off.  Eric got some really good pictures of the helix bridge, Marina Bay Sands, the city skyline, and the ArtScience Museum. 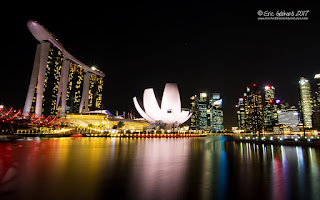 I don’t know about Eric, but my calves were about to moo they hurt so much from walking and being on our feet all day.  When we finally decided to head back to our hotel, it was approaching 10 p.m.  (way past our bedtime, Ha!)  By the time we got back to the Expo MRT stop where our Hotel was located, the mall was actually closed, so we had to walk all the way around the building to get to the front door of our hotel—I thought my legs were going to explode.
After our approximately 9-10 miles of walking around the city (we tracked it on Eric’s Strava), I was ready to take my shoes off and put my legs up when we got back to our hotel room.  Eric was anxious to check out the photos he took, so he got his computer out and got busy.  I was so tired, it was all I could do to crawl into bed and pass out.  I did not even hear Eric come to bed some time after midnight.  We thought we might go to Sentosa Island tomorrow, but since we were out so late, we decided we would have to reevaluate in the morning.
We got up around 7:45 a.m. and Eric did some work.  We looked at some of the photos we both took the day before and we lounged around until around 11 when we decided we would do some laundry.  It was almost completely clear out and thus extremely sunny and probably beyond unbearable outside.  I think that pretty much determined the fate of going to Sentosa Island.  In that kind of weather, about the only things bearable to do are in the air conditioning.

We rationalized not going out and doing much by telling ourselves we needed to save something to do for the next time we come to Singapore--the Jurong Bird park and Sentosa.  It was around 2 p.m. by the time we finished our laundry, so I started the research on places to eat.  I decided Italian sounded good and I found a place on TripAdvisor called Rosso Vino which was in Robertson Quay near Clark Quay.  It was a ways to travel for food, but there is nothing really around our hotel in the business district (other than the mall and the mega grocery store).
So we started the trek across town on the MRT and then walked about a 3/4 of a mile to get to the restaurant.  Needless to say, it was not a cool walk by any means.  We were the first patrons of the evening.  It was mostly an open-air restaurant; however, they had an air conditioned area which we gladly occupied.  We made a very wise choice with this restaurant, as it was the best meal we have ever had in Singapore.  It was so good, we already have plans to stop there on our way back from Indonesia.
After dinner, we walked around the area a bit to see what was around and then walked back through Clark Quay to the MRT station to begin the trek home.  Unfortunately, we picked rush hour to make our way back.  The one train we had to ride on for about eight stops was absolutely packed.  We were pretty much wedged in like sardines.
We finally made it back to the hotel and after posting the blog, got busy packing our luggage for the trip back to the airport tomorrow morning for our 9:45 flight to Manado, Indonesia.
Comments
See Older Posts...
RSS Feed
Back To Top